The drop shot rig delivers steady results and can be used to catch multiple species of fish.

By David A. Brown
Fish Ambassador

Of all the rigs tournament anglers turn to when they have to get a bite, the drop shot has probably salvaged more days than any other. The great part here is that this finesse rig also delivers steady results for casual, everyday fishing trips.

Yeah, it’s largely a bass thing, but anytime you need to hold a bait in place, but off the bottom, this rig delivers. That means bluegill, sunfish, yellow perch and other bottom-oriented fish will fall for the right bait presented on this rig.

Saltwater anglers find it useful, too, especially for grass flats, where holding a shrimp or minnow-style bait above seagrass beds, oyster bars or rocky outcroppings will produce redfish, trout and snook bites. (Once you move to the offshore fisheries, similar setups come into play, but the rigging is usually more complex and typically involves a three-way swivel.)

Because drop shots appeal to all of the North American black bass species — largemouth, smallmouth and spotted bass are most common — bait specifics vary greatly. For simplicity, we’ll look at the basic elements that apply to all.

In its simplest summary, you form a drop shot by tying a Palomar knot (video above) to your hook and leaving the knot’s tag end much longer than normal. After cinching the knot into place, pass that long tag end through the hook eye (front to back) and pull it tight.

This pressure kicks the hook outward so it stands perpendicular to the leader, while the dangling tag end forms a leader to which a weight is attached. The completed drop shot allows you to hold the rig in place and keep your bait off the bottom.

Drop-shot hooking methods vary based on habitat and desired presentation.

Nose hooking: Inserting a standard short-shank finesse hook through the thicker end of the bait (its nose) allows for the maximum range of fish-attracting motion for a worm, minnow or creature bait. Insert the hook on the bait’s underside, about 1/3 inch from the tip, and bring the point out through the bait’s top.

This works well in open water when fish are biting actively, but keep your options handy.

Threaded: When fish are “short-striking” (biting only the bait’s free end), you can increase the hookup potential by using a longer-shank hook, inserting the point into the bait’s head, running it through the body and bringing it out just before the band. This keeps your bait standing straight, with the business end farther down the body. When an indecisive fish bites, it’s more likely to get the hook.

Texas Rig: Essentially a weedless version of the previous rigging style, the Texas rig serves you best around grass, brush, wood or anywhere hang-ups threaten. With a beefier hook made to handle the tough habitat, insert the point into the nose, bring it out 1/4 inch lower, then pull the hook through the bait until the eye rests on the bait’s head.

Then, turn the point back toward the bait, measure the spot where the hook bend lies against the bait and insert your hook point there. This keeps your bait properly aligned and snag free.

Wacky Style: Best done with that short-shank finesse hook, this rig impales the worm roughly at the midpoint. Give it a little shake, and the worm wiggles at both ends for a lively look that earns the tough bites.

A teardrop-shaped drop-shot weight is a good bet for dragging over rock and shell, as the amount of surface area contacting the bottom returns maximum feedback. Cylinder-shaped weights are fairly universal, but their slender profile excels in vegetation and wood.

Lead works with any weight shape, but tungsten’s higher density affords two benefits: First, you can use a sinker that’s smaller than a lead item of the same weight. Also, tungsten has superior sensitivity, so you’ll be able to “read” the various bottom compositions.

Whatever your choice, look for drop-shot weights with tension clips that allow for easy adjustments. As opposed to tying a drop-shot leader directly to a weight’s eyelet, these clips allow you to snug your leader into the squeezed metal frame and adjust the length up or down as needed. This saves time, saves leader material and allows you to quickly react to changing scenarios.

Drop-shot weight size is typically relevant to depth — more water, more weight. Also, when you’re trying to cast, pitch or flip a drop shot into a particular area, going a little heavier on your weight provides a more accurate presentation.

If the fish are less aggressive, switching to a lighter weight forces you to slow down for the purpose of maintaining bottom contact. By dropping from a 3/16- or 1/4-ounce down to a 1/8- to 1/16-ounce weight, you’ll also minimize the risk of spooking wary fish, as they feel minimal resistance.

Here’s an efficiency idea: Because it’s difficult to grab small objects out of the often-narrow tackle tray slots where we keep them, save yourself some reaching by placing pieces of high-density foam (think yoga mat) or folded paper towels into the slots. This elevates the tackle and facilitates the reach.

A Helping Hand: Now, if you’re uncomfortable tying the drop shot, the VMC SpinShot simplifies this task by mounting a hook on a short wire stem with line ties at either end. Tie your main line to one end and your leader to the other, add a weight and you’re fishing.

Gamakatsu offers a similar piece of terminal tackle, the G-Finesse Swivel Shot, which has a swivel at one end and a tension clip for the drop-shot leader at the other.

With the exception of the beefed-up version, which we’ll address in a moment, drop shots are typically fished on medium spinning outfits. Lengths of 7 feet to 7 feet, 4 inches handle the job well.

Most drop-shot anglers spool their reels with 8- to 12-pound braided line because its no-stretch nature offers maximum sensitivity to help detect light bites. Also, braid’s unyielding makeup helps you set the hook, even in deeper water, by simply raising the rod and reeling.

To this braid, most will add a fluorocarbon leader of about 8-pound test (this can vary based on the habitat density or abrasiveness). Given the drop shot’s nonlinear form, it typically spins on the fall. This causes line twist, which often leads to knots and snarls.

Avoid this headache by attaching your main line and leader with a swivel. Use a dark colored swivel, as shiny stuff tends to spook wary fish. Also, be aware that swivels can collect loose grass and stringy algae in the water column, so check your rig frequently when fishing such habitat.

Note: Anglers typically secure their lure or rig by hanging their hook into a guide brace or a dedicated hook holder. That works with drop shots, too, but a weight dangling from a leader might tangle with other rods or damage its own rod. Eliminate this risk by adding a rubber band to the rod’s butt end and tucking your drop-shot weight beneath the stretchy wraps.

You can also use a twist tie or pipe cleaner to secure the drop-shot weight, as long as you’re willing to tie and untie each time you use the drop-shot rod.

Also known as “video gaming,” the vertical technique eliminates the guesswork, as anglers drop their bait directly to the fish they spot on their sonar. Precise and time efficient, the drop-shot technique will often trigger fish that have become dulled to more aggressive baits.

Drop shots commonly play the lead role, but they’re also one of the best follow-up baits when fish won’t commit to a moving bait. Case in point, during his Bassmaster Elite Series win at the 2022 season-opener on the St. Johns River, John Crews caught several nice fish on a suspending jerkbait in Rodman Reservoir; but when his forward-facing sonar showed a fish trailing his bait, then losing interest, the drop shot’s subtler, falling form closed the deal.

Beyond the video gaming approach, anglers often pitch or flip drop shots to shallow targets. In deeper water, a cast-and-drag or drift-and-drag plan works. Dragging lowers the line angle, so be aware that this brings your bait closer to the bottom. If you need it presented at a certain height, tie a longer leader.

(Tip: Lay the weight on your boat deck and hold your rod tip at your usual dragging angle, and note the distance from the deck to your hook. Adjust your leader length as needed for the desired bottom clearance.)

One last note on the drop shot: While it’s primarily considered a finesse bait, this same arrangement can easily be converted into an effective rig for heavier cover. Maybe you want to present a worm to a laydown or an isolated patch of hydrilla or lily pads, but you want something different from the standard Texas rig.

A drop shot will fall differently and hold its place in the water column — a contrast to the Texas rig’s straight fall. Often, that change in appearance is all you need to trigger a fish that may have seen a bunch of the more traditional looks.

Of course, trying this with the same light line and spinning gear you’d use for a standard drop shot is a losing proposition. So, either beef up your spinning outfit to a medium-heavy or go with sturdy baitcasting gear.

Also, you’ll need to go with a heavier line and leader — 20- to 30-pound braid with a 15- to 20-pound leader. Going much heavier on the fluorocarbon makes it tough to tie this rig, but a 20-to-20 line-leader setup will handle most of what you’ll hook.

Hooks will be larger to accommodate a bigger setup, and even though it’s a shallow scenario, a weight of 3/8 to 1/2 ounce will achieve the fast fall that often triggers a reaction bite.

Oh, and when you do this, you change the name from drop shot to “power shot.” Some refer to a beefy version as a “Bubba shot,” so whatever you prefer.

Clearly, drop-shot options are many, and variations are limited only by the angler’s imagination. Whatever your preference, this rig helps you get the drop on your target species. 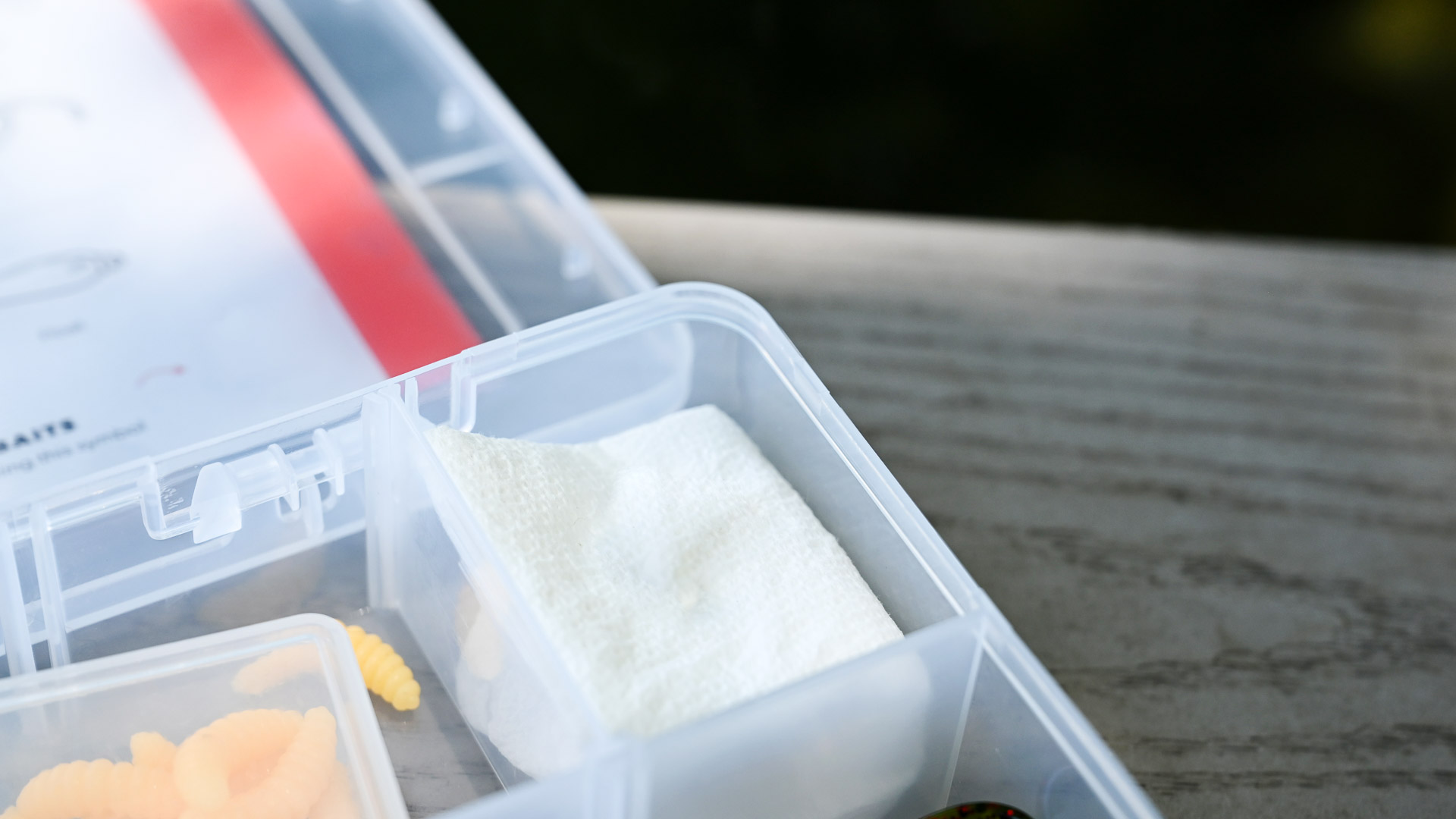 Because it’s difficult to grab small objects out of the often-narrow tackle tray slots where we keep them, save yourself some reaching by placing pieces of high-density foam (think yoga mat) or folded paper towels into the slots. This elevates the tackle and facilitates the reach.

With slight adjustments to their original technique, see how Jimmy Kennedy spends a successful day with friends catching perch.

Fly fishing can offer a peaceful weekend to those searching for picturesque landscapes, calm waters and wildlife.

Nightcrawlers are a great all-around bait to catch a variety of species. Here are the seven simple steps to ensure you’ll have a successful day fishing.